It all started when I entered this summer program in 5th grade, I met a very cool girl. She was really talkative and into minecraft, it was definitely a hyperfixation for her. She always talked about creepers and enderman and I didn’t really get any of it. I decided to start getting myself into minecraft too, probably to please her x3.Then my dad gave me his old phone (not able to make calls, just wifi connected) I found the free minecraft app. I honestly enjoyed the game, discovering new things and researching certain mobs. It was so limited compared to now! When I discovered lava I was so shook and I saved that world, it was such a rarity!

Towards the end of the program we had free reign on where to go. I went inside the computer lab and found.. MINECRAFT. Playing the full version on the computer was way better than that filthy app. There was *horses*, a recent update at the time and *bats*. Too bad I had a short amount of time and the game was laggy and I got stuck in a cave. Anyway I stopped going to the summer program and never saw my friend again.

Years had passed and I didn’t think about Minecraft until my brother grew up. He began to play trial mode on xbox1 and I’d join him like the good sister I am. Playing with him rekindled my interest in the game.

The thing I like doing the most is filling my map up and then settling near a village. I love the new village update and the pillagers and the raids. I feel more of an attachment to them now that they're sentient and I stay longer in my worlds cause back then I would make a new world every week.
Right now I'm really into mesa biomes and rainbow terracotta >:3. I'd like to make more intricate houses in the future using my beloved Acacia wood and red sandstone. Nyall are lucky that I don't know how to make concrete cause I would have had a blinding photo gallery below x3. 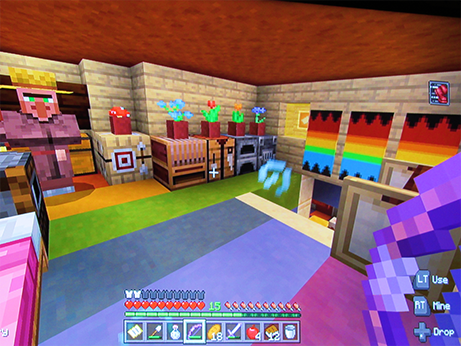 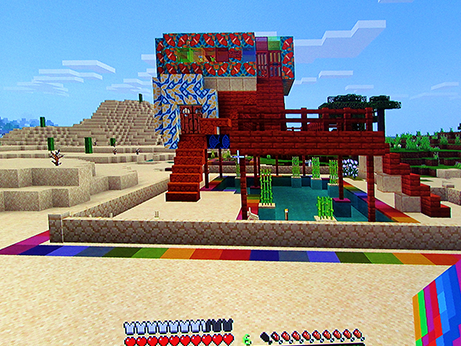 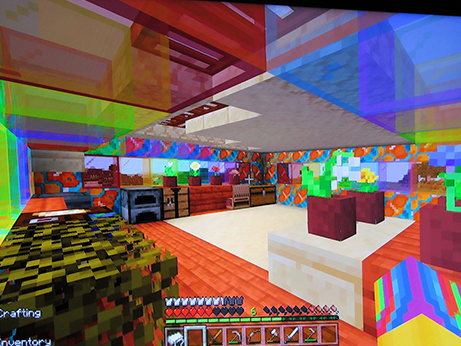 Below are my beautiful cats (Banquo is my brother's actually but his controller doesn't work so he can't claim it). They are named in honor of the subject I'll be presenting on Thursday. 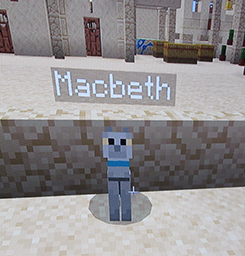 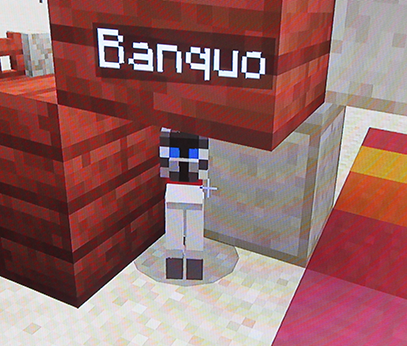 Sticking to one world for a whole month sure is fun! The villager update is the best one so far because now I feel like I have a purpose in the game. Right now I have a whole town of villagers, around 3-4 generations of them because they kept dying from the low defenses. They haven't reproduced lately and most of em have diamond badges, the cleric no longer accepts raw meat T_T. I managed to get a name tag for 4 of them, Luis Miguel the farmer, Abel II the toolsmith, Jimin the stone mason, and R.I.P Wormy Snickett the librarian (fuckin drowned I tried to save him omg). Luis Miguel is a second generation citizen of my nameless town and I love him, he is my best source of income. My collection of cats has also grown, I named them all after touhou characters *smirk*, they guard the borders of my town. I will provide some pictures for nyall tomorrow.

Sorry, I haven't posted any images of my village, I've just been lazy. Anyway many things have happened since last month. I triggered a raid, hoping to get that savior achievement and gaining more emeralds. When I was done I was greeted by 10 villager children, the butcher, and Jimin. You know what that means? It means that the majority died from that one vindicator I was looking for, then they mated to fill up the bed spaces. Now all my villagers are nameless because the nametags disappear for eva. Then the other generation died and was reborn again. I finally decided to place all he beds in a safe home and put torches everywhere. No one has died ever since.

With the knowledge that my village is now 99.9% safe without me, I set my eyes on a new area..the Savanna. I built a new home, connected by the pyramid and then healed some librarians. I also learned how to get music discs heehee its a secret. The new generation came, with their red tops and grew with their careers. I was so proud, too dam proud. It was night when I heard thumping from the entrance, I thought that the zombies couldn't get in so I texted my friend, the Ayuwoki. When I looked back up everyone had been turned to zombies, I had to run across the desert to get the cure but when I got back the sun was up and everyone was burned crispy. There was one survivor, a child, I was happy until he turned into a nitwit. Anyway I had to do the same process of healing, kidnapped a villager for mating, and it's all chill again. You know how it is.